The crown jewel of our adventure known as “Spain 2017” was “La Alhambra” in Granada.

This monument’s prominence during season 2 of the Spanish television series “Isabel”, would only make us yearn to someday visit it. The pictures viewed of it while surfing the web, would further fuel our desire to visit this World Heritage classed monument.

“Al-Hamra” comes from the Arabs and is usually translated as “red castle”. We seeing the different color tones of its walls and towers, one can understand why it was named as such. These walls and towers are in truth “el Alcázar” of Granada, a fort built to protect the city. This “Alcázar” differs from others built by the Moors as it contains a small city within. This small community was mainly comprised of the servants and guards to Mohammed I which moved his official residence from the nearby “Albaicín” to the “Alcázar”. This enclosure which also had its own mosque was known as an “Alcazaba”.

“La Alhambra” is a site which groups various components among which we can find, the “Alcazaba”, the “Generalife”, the Nasrid Palaces, the Charles V Palace y others. It is worth mentioning that the “Generalife” is in fact a site adjacent to the “Alcazaba” and is outside the walls that surround the “Alhambra”. This justifies the distinction of the separate sites as “la Alhambra” and “el Generalife”. The combined complex is atop the “Sabika” hill and built over the ancient Roman defensive enclave.

“La Alhambra” is the most visited site in all of Spain, making it mandatory to purchase tickets for the entry to the Nasrid Palaces at least a month in advance. Entry is restricted to a specific amount of visitors and when buying your tickets, one can select the hour desired for entrance. It is important to be on time or on the contrary you may miss out on the grand opportunity to view this marvelous site.

“La Alhambra” and the “Generalife” extend over a large terrain to view and enjoy. Due to its size, it is recommended that one allocates at least four hours to visit this complex. Additional time is needed in order to climb the “Gomerez” hill to the site. Despite it being very steep, we decided to climb the hill. If you are physically fit, you should do likewise. The trees provide protection from the sun and the hike can be a cool climb. The walk up allowed for brief pauses to view other things which by any other means would be missed.

We approached through the gateway known as “la Puerta de las Granadas” quickly passing the “Cruz del Artillero” (Archers Cross) quickly encountering the “Pilar de Granados” (a fountain). Just ahead we find a statue in honor of Washington Irving, famous author of the “Tales of Alhambra”. 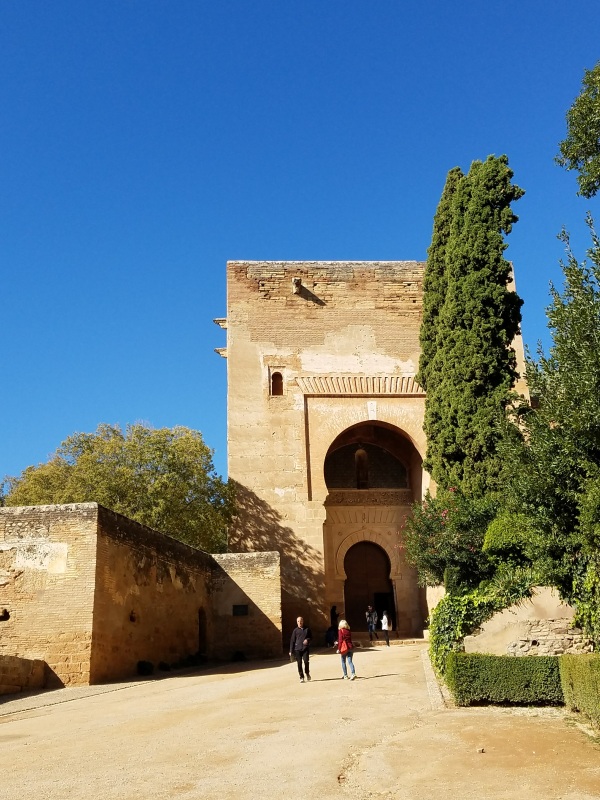 We have finally reached leveled terrain as we approach the site’s main entrance. The “Gomerez” climb has been overcomed!